Honest question.  How often do wives plan holiday weekends?  Because My Man is more of a participator than a planner, I organize the excursions about 99 percent of the time.  Friday night I announced “Nick, you are planning Sunday.  We are going somewhere and you are planning it.” 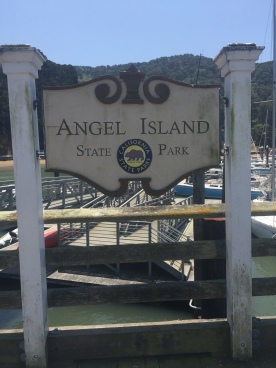 I thought he might wait until Sunday morning to ponder a few ideas, but he took it pretty serious from the jump.  After he asked me about some of our favorite spots (Paso Robles, Carmel, Sonoma, Alexander Valley, etc.), My Man said he wanted to take our bikes and ride around Angel Island.

We have never been to Angel Island or even talked about going.  But, I had wanted to go for years!  It was a great pick for a day trip!  I suggested we also invite his younger son Braden, who lives in the city. Braden was “down for that.”

My Dad wanted me to write more history into my blogs, so here goes.  Click here to read Angel Island’s official site and then the Wikipeka page.  The island has been used for a variety of purposes, including military forts, a US Public Health Service Quarantine Station, and a US Bureau of Immigration inspection and detention facility. The Angel Island Immigration Station on the northeast corner of the island, where officials detained, inspected, and examined approximately one million immigrants, has been designated a National Historic Landmark.

There are no cars on Angel Island or bridges to take you there, so if you don’t own a boat, you have to take the ferry. We took the Tiburon Ferry which got there in 20 minutes (on the hour from Tiburon). There was also one that leaves from San Francisco, but it took an hour. The Tiburon Ferry was $9 one way (in case you decide to swim back) and $15 round trip, plus a dollar a bike.

If you didn’t bring your bike and chose to rent on the island, it was $15 an hour or $50 a day.  Note: they had a very limited supply of bikes (after the second ferry docked they were out of bikes!). 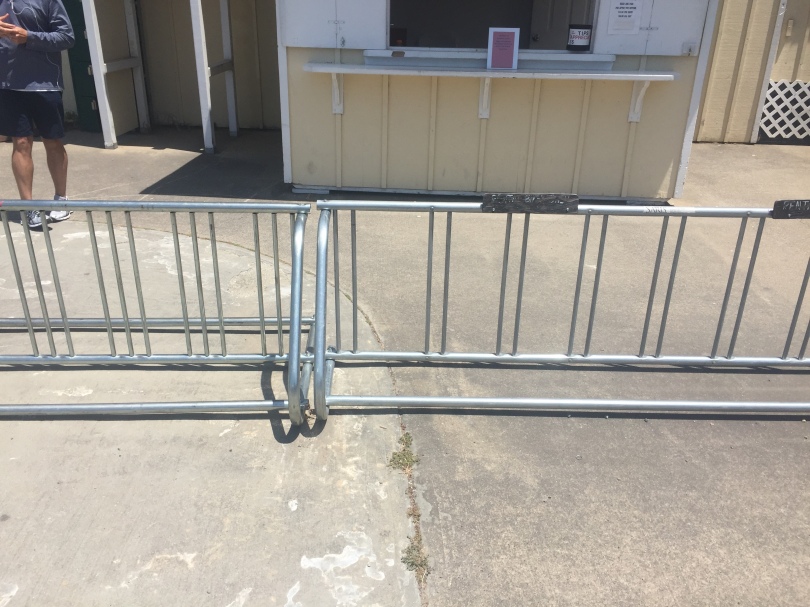 After we got off the ferry, it was time to ride up the mountain on the bike path.

Biking on Angel Island wasn’t for wimps. There were lots of hills going straight up and down.  I was proud to say I only walked my bike up one span of the road (same span as the boys).

We walked down to the Immigration Station and because we came on the first ferry, it was empty. It was very sad reading about how bad people were treated.  I hope my grandfather was treated better when he came over from Germany through New York City. 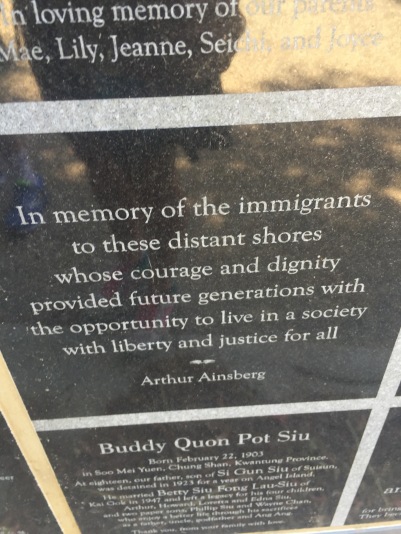 We had a good chuckle when the two boys (Dad and son) posed in front of the bell commemorating the island’s immigration services – eating string cheese. 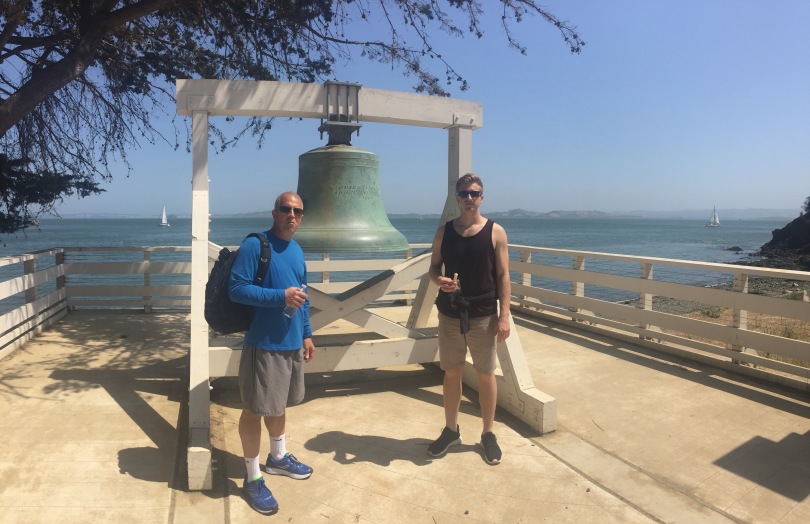 One of my favorite places on the island was the old hospital.

It was one building we were able to go in.  All three of us walked around quietly, enjoying the 90-year-old building, faults and all.  I wonder how many surgeries were done there and how many lives were lost prematurely.

It looked like Chip and Joanna Gaines had been there – working to make it an open kitchen concept, knocking down walls.  (aka: Fixer Upper) 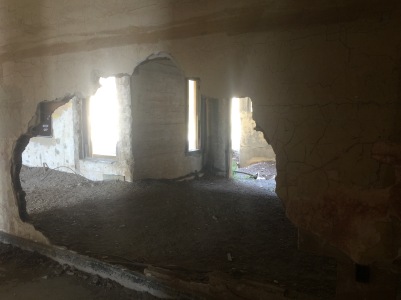 I loved all the colors and the Windows in the building.

At some point, they knocked out all the hospital staircases so it had an extra creepy feeling to it.  The photo below was taken looking straight up. 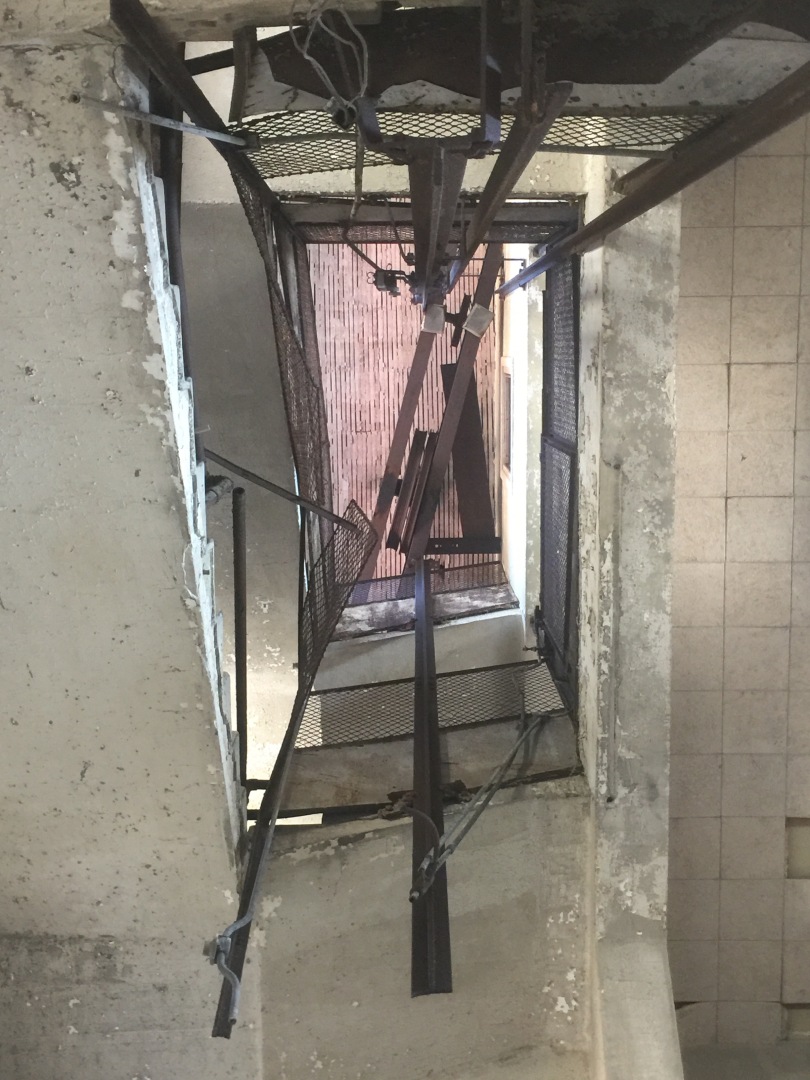 My Man snapped this one of me. It reminded me of a scene from the movie, The Shining. #redrum 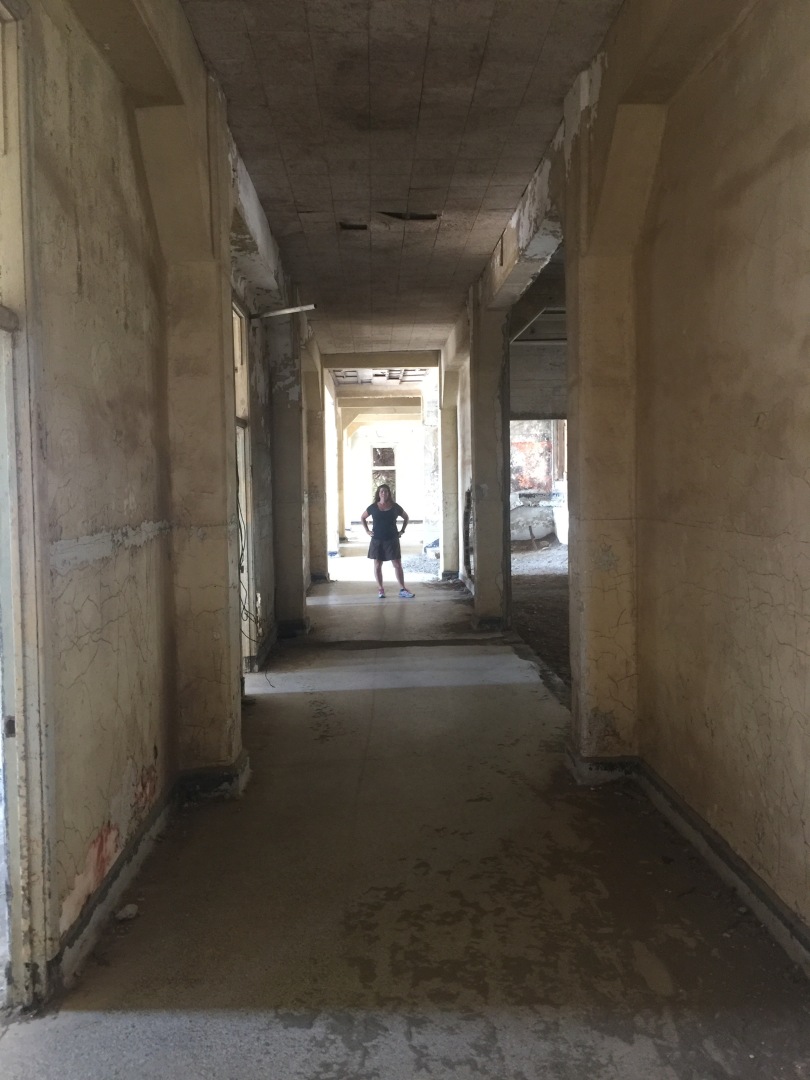 Angel Island has 360 degree views of the Bay Area so we pedaled on, but not before we checked out the Post Exchange, a dining hall, and a few other buildings. 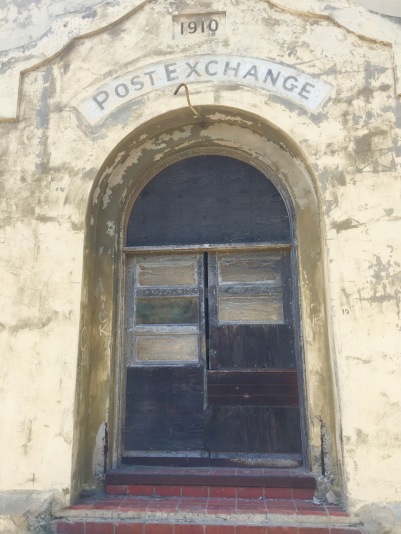 How was this for a selfie with the City? 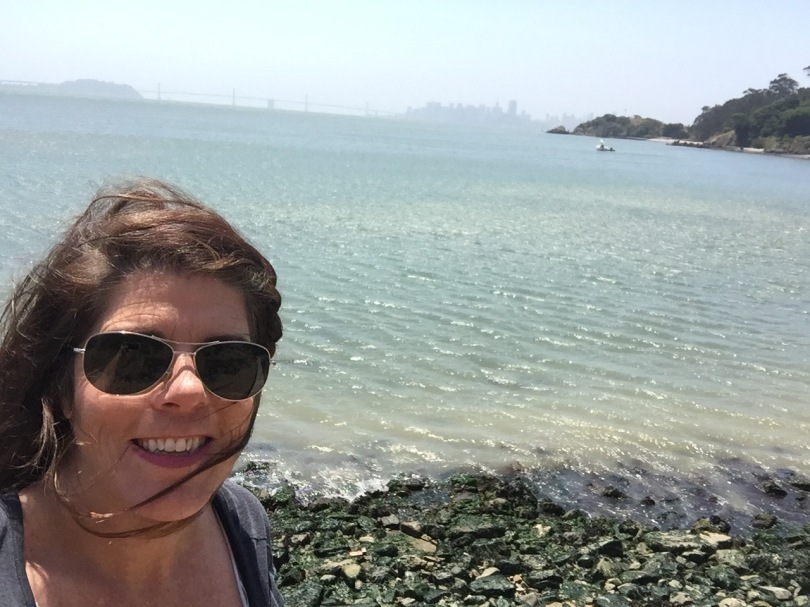 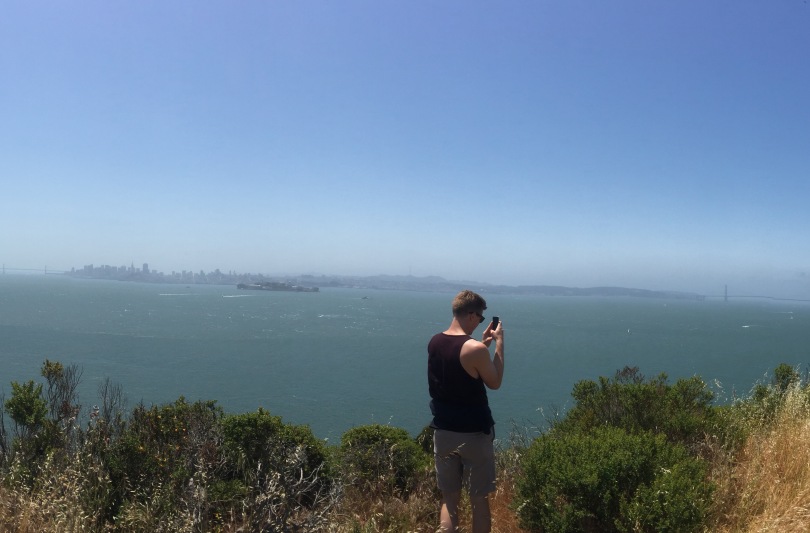 The video below also featured the trams that went around the island on hour-long tours (we passed because we wanted to get some exercise).

We kept pedaling and stopped for a group shot! 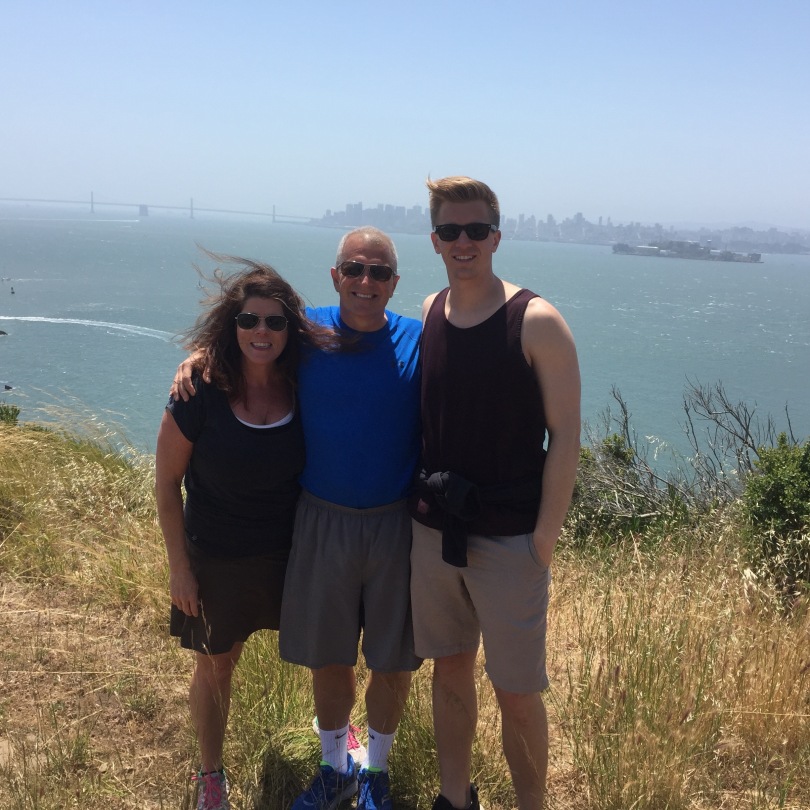 A few more photos from our stops. 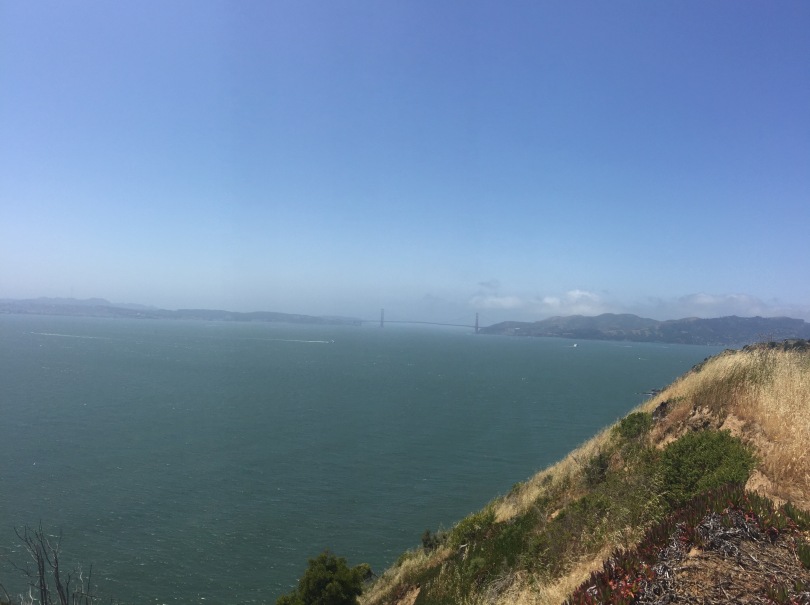 I shot the video below while riding my bike. My husband just laughed when I showed him later. He said “You look like a little girl.  You look so happy!”

This day, his planned day, I was overjoyed.